This year, our company is celebrating a small jubilee of our 15-year journey. Deep in our hearts, we believe that the key to our success lies behind the word knowledge. As a part of the 15th anniversary of ICodeFactory, we decided to do a project with an institution that has been selflessly sharing knowledge for 200 years. It is not difficult to guess that we are talking about Matica Srpska - the oldest cultural and scientific institution, which from its founding until today has left a big mark on the culture and education of our community.

The same values towards learning, knowledge, and education have united us and today we are having a conversation with the manager of Matica Srpska, Mrs. Jelena Veselinov about it. Enjoy reading it just as much as we enjoyed making it. 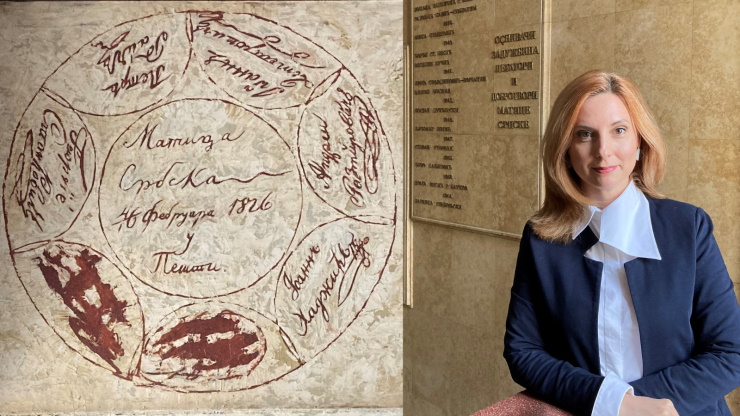 1. Could you briefly tell us the story of Matica Srpska and its centuries-long journey through the culture and education of our community?
Matica Srpska is our oldest cultural and scientific institution, which was founded in 1826 in Pest as an association of young Serbian merchants. Its activities from the beginning were aimed at presenting Serbian culture in Europe, enlightening the Serbian people and strengthening national identity. It was created as support of Letopis Matice srpske (The Chronicle of Matica Srpska), which is, as far as we have known, the oldest living literary magazine in Europe, and probably in the world.

Its 200-year duration in continuity is impressive, considering the discontinuity in our everyday lives, precisely because of the universal goal toward the common good of the Serbian people in an educational, scientific, and cultural sense. The story of Matica is really rich and long, so we will only dwell on the important points for "our story".
After the founding, numerous editions with an educational character were created. Libraries with a literary fund from various scientific fields were formed, which led us to today's complex system of Matica Srpska. Today's system implies a modern scientific institution divided into 7 scientific departments with 3000 associates and a rich publishing activity with over 100 scientific projects.

Considering the great development, a completely different organization within the system of Matica Srpska was required, therefore the Library, Gallery of Matica Srpska, and the Publishing Center have stood out.
Matica Srpska has become one big system, with a mission that has now gone significantly beyond what it was in the beginning, but has basically still remained the same and with the same values.

2. Can you bring us closer to the importance of Matica Srpska in education?
When we talk about education, Matica follows the written development from the beginning - the first letters at elementary school, to people who are on Ph.D. studies. Every pupil at school needs Pravopis srpskog jezika (The Spelling book). Matica Srpska publishes Pravopis srpskog jezika, which is done by a team of the best linguists in our country. There is also the standardization of the Serbian language through normative grammar and encyclopedic and lexicographic publications. We publish various publications at the highest scientific level. With our scientific journals, we provide the opportunity for young people to be heard, and also for them to learn from more experienced researchers.

Besides publications, we organize lectures and music evenings (concerts) on our premises. All of our programs are free and open to all those interested in learning and enhancing their knowledge from the most eminent experts.

3. What values have followed Matica Srpska through the centuries, which proudly stands out even today?
As we said, the values of Matica Srpska were born on the idea of enlightening the Serbian people, strengthening national identity, and presenting our culture in Europe, and thanks to enthusiasts, who want to contribute to culture, education and science, Matica has survived. The story of Matica is a humane story about people who have a vision of the future, think ahead and invest in true values. Your company has recognized our goal to invest in science and culture. That is what remains and passes on from generation to generation.

4. In which direction do you think that Matica Srpska will step in the future? How will it continue to nurture the same values towards learning, knowledge, and education?
Matica Srpska can only go forward. We can see that from the increase in the number of projects, publishing and other activities. We participate in international projects and wherever the goals of Matica Srpska can be achieved. Our work with some countries on bilingual editions of poems, translations of publications, and books make them available abroad. Showing our work to Europe and the world is a very important segment of our goal.
Therefore, the core goals and values of Matica Srpska don’t change, they are an integral part of what Matica is and stands for. But, the way in which we will continue further is changeable, it's coherent with time, while those fundamental values that have been there from the beginning, always remain.

5. What challenges does Matica Srpska have in its work and how does it face it?
Throughout history, Matica Srpska has had many challenges, from being banned to moments when it could not survive financially. In those financial segments, there would always be a benefactor. When people with a vision (once traders, and today companies that also have a vision) of science and culture are connected, there is no problem that cannot be solved.

We are very grateful to ICodeFactory for recognizing our values and donating 4 computers worth 500,000 RSD. We arranged them in 4 critical places where we desperately needed them. Two places are related to the publishing business, which requires a computer with strong performance, and the other two computers went to our Manuscript Department where we are in the process of digitization. Digitization of archival material helps to keep it from being damaged (this is documentation that must be kept according to certain archival standards) and also facilitates the way of working with users, for various research or insights.

With every challenge that Matica has to face, there must be long-term planning. The fact that we don’t have funds or solutions for something immediately, does not mean that we should not plan well for the future.

6. Libraries have moved to the Internet today; museums are making virtual tours. How do digitalization and new technologies affect Matica Srpska?
Our digitalization story is goal-oriented, e.g., for all concerts and lectures there is a live stream on our channel, and we have everything on the YouTube channel.
In cooperation with the Library of Matica Srpska, we are digitizing journals, so that the journals could be downloaded. We have Letopis in digital form, and we have mentioned the digitization of manuscripts. Our plan is to publish some parts of our works on the Internet soon.

We should not forget that Matica Srpska is like an old lady and that everything is going slowly, at first glance. However, Matica would not have lasted 200 years if we had followed every trend that appeared. Maybe someone would say "you could have done more" but I think this is the right measure. We try to keep up with new technologies, but carefully and with high quality.

7. Finally, we were introduced to another knowledge-driven story, as well as an example of how knowledge, education and investment in the same survive through the centuries. How important is investing in knowledge? Is it the most valuable investment?
I am very happy that ICodeFactory agrees with our belief that knowledge is something that survives. Although it sometimes seems to us as like we have taken 2 steps back, knowledge offers the possibility to go 3 steps forward, because knowledge is something that has lasting value. Knowledge cannot disappear as material values, but only grow and multiple, so it is the only safe investment.

Thank you Mrs. Veselinov, for such a great conclusion and for all that you are doing for our community.

Once again, we are witnessing that knowledge, education, and investment in the common goal have no expiration day and lasts forever. By supporting institutions that nurture and share knowledge, we improve the present and build a better future. Sharing knowledge is a power, not keeping it selfishly for ourselves. Join us in implementing a vision that lasts for centuries.

ICodeFactory uses cookies to improve user experience. By continuing to use this site you agree to this. Accept cookies